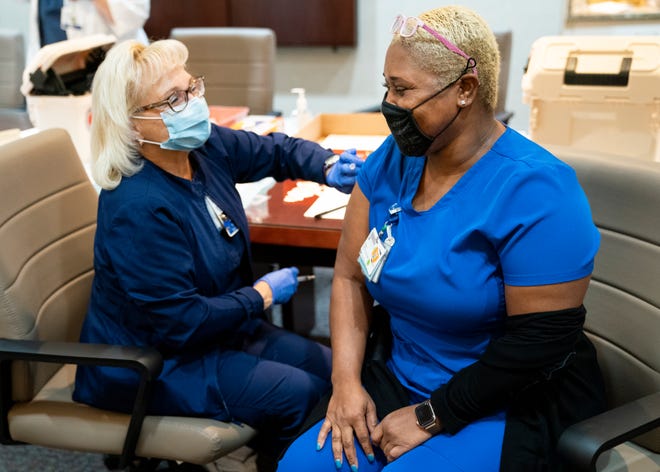 As staffing agencies for travel nurses double and triple their fees to hospitals, the Florida Hospital Association is tracking complaints of price gouging in other states. California’s hospital association last month asked the state Department of Justice to conduct a probe on behalf of its 400 hospitals.

“We need your immediate support to ensure that high quality, affordable care remains available for all who will need it in the coming weeks and months,” the association’s Sept.15 letter states.

Inside COVID units:‘They’re just trying to find a way to stay afloat.’ Take a look inside COVID-19 units across Florida

Florida’s hospital association declined to say whether price gouging is occurring or if a statewide investigation is warranted, but “we are closely watching what is going on in California and other states,” said Mary Mayhew, the group’s president and chief executive officer.

Hospitals in Florida have responded to staffing shortages differently, but nearly every hospital is using travel nurses to combat the shortage and handle surging patient volumes due to the pandemic, Mayhew said. The cost hospitals are paying for travel nurses is a huge concern.

“Across the state, we are hearing reports of prices two to three times earlier levels,” Mayhew said in an email.

“Florida has very strong laws and regulations against price gouging during hurricanes, and for good reason. It’s simply wrong to take advantage of a crisis,” she said.

Outcry over what staffing agencies are charging hospitals for travel nurses has been ongoing for months. In February, the American Hospital Association called on the Federal Trade Commission to investigate, saying “outrageous rate hikes appear to be naked attempts to exploit the pandemic,” according to a Feb. 4 letter to the federal agency. The national hospital association, which represents nearly 5,000 hospitals, has not received a response, a spokesman said.

Aya Healthcare Inc., which bills itself as the nation’s largest travel nurse agency, allegedly charged $160 or more an hour for temporary nurses, according to a lawsuit filed in March by Steward Health. The Texas-based hospital system operates 34 hospitals in the U.S. including eight in Florida.

Typically the rate was $75 an hour before the pandemic, according to the March 8 complaint in Massachusetts Superior Court.

A month later, Aya filed a counterclaim to recover an unpaid contract balance of $40 million from Steward, saying the hospital had agreed to all staffing rates across the country when it signed a crisis staffing agreement March 23, 2020.

In California, hospitals have little choice but to pay the current rates and fear a “public airing of concerns” could lead to unwillingness on the part of some agencies to work work with them, according to the California Hospital Association. Hospitals in poorer communities are the least able to pay high staffing agency fees, it said.

It’s not clear if hospitals in Florida serving poorer communities are similarly hamstrung, but at least one rural hospital, 25-bed Hendry Regional Medical Center in Clewiston, says it has had to stretch its budget to handle the cost of travel nurses.

“It is very concerning we do not have any alternatives if we are to continue serving the community,” said R.D. Williams, the hospital’s chief executive officer.

What can travel nurses earn?

Florida recently overtook California as the state with the highest number of travel nurses applying for positions, followed by Arizona, Minnesota and Georgia, according to Vivian Health, a hiring marketplace firm that connects healthcare professionals to jobs but is not a staffing agency.

Florida has always been a destination for travel nurses, especially in the winter months, said Lynne Gross, president of RNnetwork, a Boca Raton-based staffing agency.

“We typically see an increase in demand from fall to spring, although over the last few years the summer has been popular as well,” Gross said in an email.

The pandemic has led to a 58% increase in demand, and hospitals in the state “had to double their rates to attract providers,” she said.

Nurses have left their permanent jobs at hospitals due to stress and to accept travel positions where pay rates vary greatly depending on the setting and the specific contract, Gross said. She declined to offer pay ranges.

“They also want to be adequately paid for their services, so many are finding new jobs both in permanent and travel positions,” she said.

Gross did not respond directly when asked about the complaints of price gouging by the national hospital association or how the Florida association is watching rates.

“Demand for nurses in all settings, not just for travel, is very high, causing rates to rise across the board,” she said.

September’s average weekly pay for a travel nurse in Florida was $3,056 — 4% above the nationwide average of $2,935, according to Vivian Health. That’s a big jump from September 2020, when travel nurses in Florida were paid $1,744 a week.

“The pay has increased dramatically over the past six months and is likely to be a factor that is driving the interest from nurses to travel (here) to take assignments,” according to Vivian Health. “Florida is currently the 13th highest paying state for travel nurses. Job volume is at an all-time high.”

Nurses who are willing to leave their homes and full-time jobs to take temporary gigs elsewhere can earn around $50 an hour, according to ZipRecruiter, an employment website.

The average annual salary nationally for a travel nurse is $108,070, or $9,000 a month, which takes into account a total package that includes non-taxable stipends for housing, meals, mileage and sign-on bonuses, according to TravelNursing.org. The group used figures from Indeed.com, another employment website.

The median annual wage for registered nurses was $75,330 in May 2020, according to the latest data from the U.S. Bureau of Labor Statistics.

Because the stipends are classified as reimbursement and not income, travel nurses bring home a higher total pay compared to staff nurses, according to TravelNursing.com.

Job postings with Fastaff Travel Nursing show night shift nurse openings at Florida hospitals for $5,100 a week. Some positions are vacant, while other night shift positions for $6,100 a week have been filled.

At Lee Health, the largest publicly operated hospital system in Southwest Florida, “The rate for travelers is approximately double what it was two years ago,” spokeswoman Mary Briggs said.

She did not say what percentage of the nurse vacancies are being filled by travel nurses.

“Due to the nationwide nursing shortage, it is necessary to use travel nurses to supplement our full-time staff to ensure we can effectively care for all our patients during the pandemic and other periods of increased patient volume,” Briggs said.

The state’s surge of COVID-19 cases this past summer from the highly contagious delta variant has not been a reason given by any travel nurses who declined a contract with Lee Health, nor has the workload been a reason, she said.

“Travelers are willing to go to locations or states with the highest rates,” she said. “Travelers are currently here at Lee Health and if needed for season, we will work to extend their contracts.”

The NCH Healthcare System in Southwest Florida is relying on travel nurses to help fill about 45% of its 190 openings for registered nurses, Renee Thigpen, chief human resource officer, said in an email.

On Jan. 1, 2020, before the pandemic started, NCH had 35 travel nurses working in its hospitals. That rose to 145 travel nurses by the end of last month.

The hospital system, the largest in Collier County, has roughly 1,300 registered nurses among a workforce of 5,000 employees.

There’s no question that hospitals across the country have paid much more for qualified travel nurses as the pandemic heightened competition, Thigpen said.

“Due to demand, we are paying well over twice what we would ordinarily pay for a travel RN as compared to what we used to pay pre-COVID,” Thigpen said.

Hendry Regional, which has 38 registered nurses out of a workforce of 250, had tried to steer clear of hiring travel nurses because of the expense, but that has not been possible during the pandemic.

“We are currently filling about 10 spots with travel contactors now,” Lisa Miller, director of human resources, said in an email.  “We have hired 28 travelers in the last 18 months (when) usually we would hire less than 10 in an 18-month period.”

The hospital has been able to stretch its budget to handle the expense with the help of some of its federal stimulus money, said Williams, the hospital’s chief executive officer.

“The cost of travel nurses has increased significantly since March of 2020, more than double what we were paying pre-pandemic,” said Williams, adding that it is difficult to attract and retain suitably skilled nurses to the hospital.

“Many nurses are accepting travel assignments for significantly more than we can pay them here,” he said. “That and larger facilities in metropolitan areas have implemented sign-on bonuses and rates of pay which we are unable to match.”

A nursing shortage with no end in sight

The national shortage of nurses that predated COVID-19 has only worsened as nurses leave the profession due to stress, burnout and rising workloads.

A survey of registered nurses showed 36% were thinking about leaving bedside care or already had, according to the findings from 1,000 nurses who were queried in March by the American Association of International Healthcare Recruitment. And 60% said nurse-to-patient ratios rose to unsafe levels in the last year.

Roughly 25% of registered nurses in Florida left their jobs last year, citing burnout as a top cause, according to a study by the state hospital association last spring when the vacancy rate stood at 11%.

“A shocking 1 in 3 critical care nurses also left the field since the start of the pandemic,” the association’s Mayhew said. “Florida hospitals are reporting significant staff burnout among all staff, especially nurses.”

Last week, the group and the Safety Net Hospital Alliance of Florida released a study showing no light at the end of the tunnel for hospitals and their staffing woes.

The state is facing a shortfall of 59,100 nurses by 2035, which includes a 12% shortage of 37,400 registered nurses. The state will also have a 30% shortage of 21,700 licensed practical nurses. The two groups commissioned the study, which was conducted by IHS Markit, an analytics firm.

“Florida needs nurses now and well into the future,” Mayhew said in a news release. “As Florida’s population continues to grow, our healthcare system must be ready to meet the ever-increasing demand for services.”

“As we have seen throughout this pandemic, there is no substitute for the care of an excellent nurse,” he said in a news release.

There are roughly 194,500 openings nationally for registered nurses each year in the U.S., according to the U.S. Bureau of Labor Statistics.

The lucrative pay for travel nurses has compounded the nursing shortage in the state, said Willa Fuller, executive director of the Florida Nurses Association.

She’s heard some nurses have been offered $100 an hour to travel, but she doesn’t know to which states or if that’s within Florida.

“They are offered an insane amount of money,” Fuller said. “I even heard some are paying off their mortgages.”

Despite the cost of travel nurses, many hospitals have no choice but to use them, Fuller said. “They prefer to have an in-house pool,” where nurses who don’t want to work full time are willing to accept shifts to fill needs. Pool nurses get a higher hourly wage than staff nurses but no benefits.

Even though Florida led the nation for many weeks with its high delta variant cases and hospitals were overflowing, that didn’t stop out-of-state nurses from coming to Florida, Fuller said.

“If they pay them the money, they will come.”